“The M” is hardly the longest or most interesting hiking trail near Missoula, but it is certainly the most iconic. If you haven’t ventured up the ¾ mile trail, you have at least seen it from various places in Missoula. In fact, I can see it from my front porch, and on the drive from my parents, and walking along the Kim Williams Nature trail by the river, and on the way to get bagels this morning. As I headed toward campus on Friday, I had my target in sight most of the way.

But for what it lacks in isolation, the M makes up for with its quick proximity to the city. The trail zigzags from the east side of the University of Montana campus up Mount Sentinel. The M itself–which is literally a giant letter M on the side of the mountain–has been around since the early 1900s when a group of students constructed it out of rocks. It was later a wooden structure, then a larger stone M, and then in 1968, was updated to be the current concrete letter, which is whitewashed smooth enough to slide down if you don’t care about ripping your pants.

Two summers ago, I hiked the M with my friend, Molly, and my cousin, Seebee. Just as we headed for campus, we found ourselves in the midst of a rare summer downpour. The rain was so heavy that we stood under the eves of a garage until the storm passed. When we reached the M without being hit by lightning, it seemed we had cheated fate.

A hike up the M was my first date with my husband. It was where we had our first argument. And last year, we went up in November when we were first talking about moving back to Missoula. It seemed like a bad idea as we started up, turning our faces away from the wintry wind, but by halfway, the physical exertion had warmed us. I’ve never planned it to be so memorable, it’s just a nearby activity that gets you moving. “We’ll hike the M and we’ll see where that leaves us.”

In the end, maybe the M is not so much a hike, but a ritual. It’s a good dose of healthy pain as you huff your way up the switchbacks. But this is replaced with a sense of accomplishment and almost complete amnesia of the struggle as you round the last few bends and rest on the cold concrete. 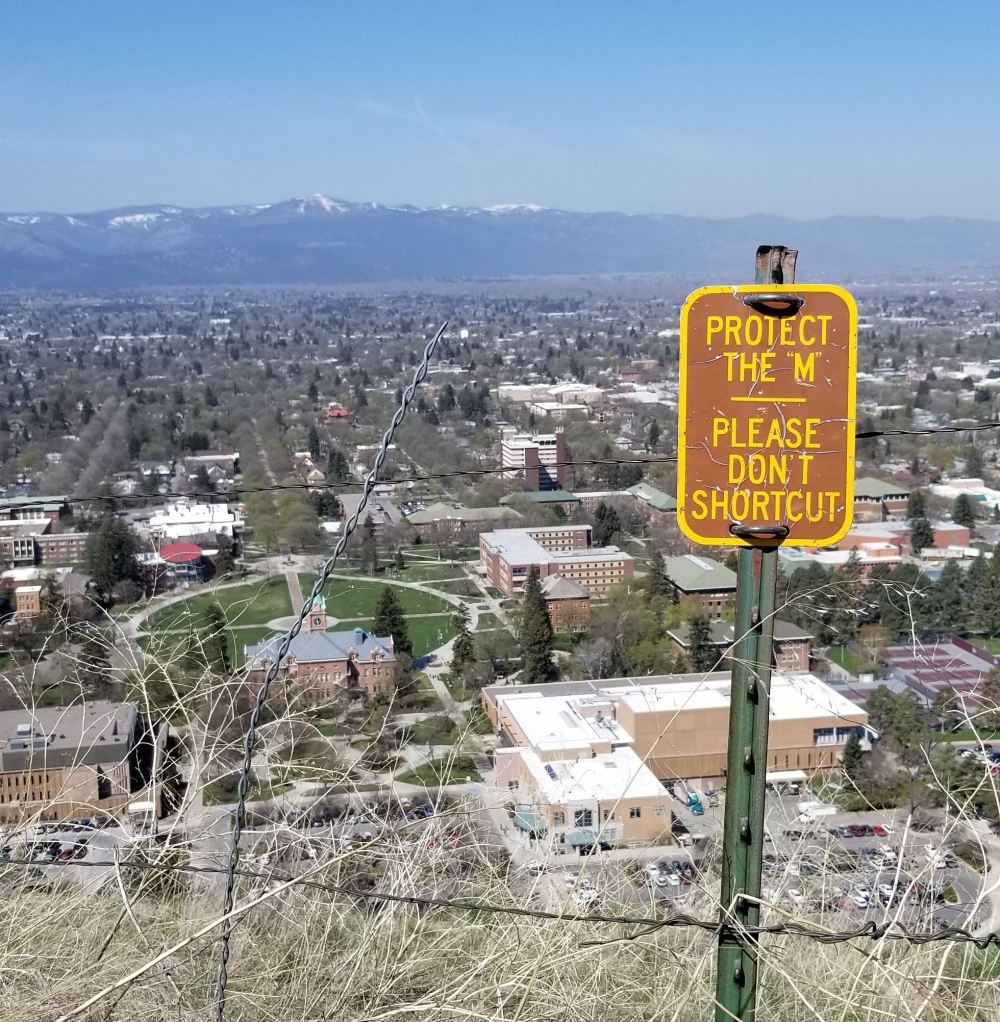 This was my first time up since moving back. I used the excuse of needing to take pictures to pause at corners and catch my breath, and at the top, I looked for my new house, following the river to my neighborhood, in the city that I once again call home.

As I was coming down, I passed a mother and a talkative boy of about 7 or 8 swinging a plastic orange water bottle as long as his torso. As he turned onto the 11th switchback, he said, cheerfully, “Look at that, we’re almost there, wasn’t that easy?”