There is one Sunday a year in Requena that all is pink. If you go to a bar, you find the bartender with a pink shirt. It’s the same if you go to the tourist office or the bakery. You find pink ribbons in the windows of houses and balloons of the same colour in Fuente de los Patos. Even the lights that illuminate the monument to the grape harvest shine pink at night.

This show of color is not due to a national holiday or anything like that, but because one day at the end of October, thousands of people in Requena join in an act of solidarity, the great Carrera Contra el Cáncer de Mama.

This year, the race was held October 21st, since the 19th is the International Day of Breast Cancer. It was organized each of the last four years, by the local association AMACMA D8 in collaboration with Trail Requena, a nice group of runners who not only enjoy running, but like helping out as well.

AMACMA D8 is a group of breast cancer survivors who raise money for research and help other people suffering the same way they themselves suffered not long ago.

When all these factors are joined, the resulting crowd is called the pink march; a run of 6,000 people packing the streets of an 18,000 people city. As you can imagine, there are many more people participating in the run than there are spectators or onlookers!

The weather was nice for the day of the event, and Diana and I met with my friend Vicente at Fuente de los Patos about ten minutes before beginning of the run. At 11 o’clock, we were at the starting point ready to do our bit. 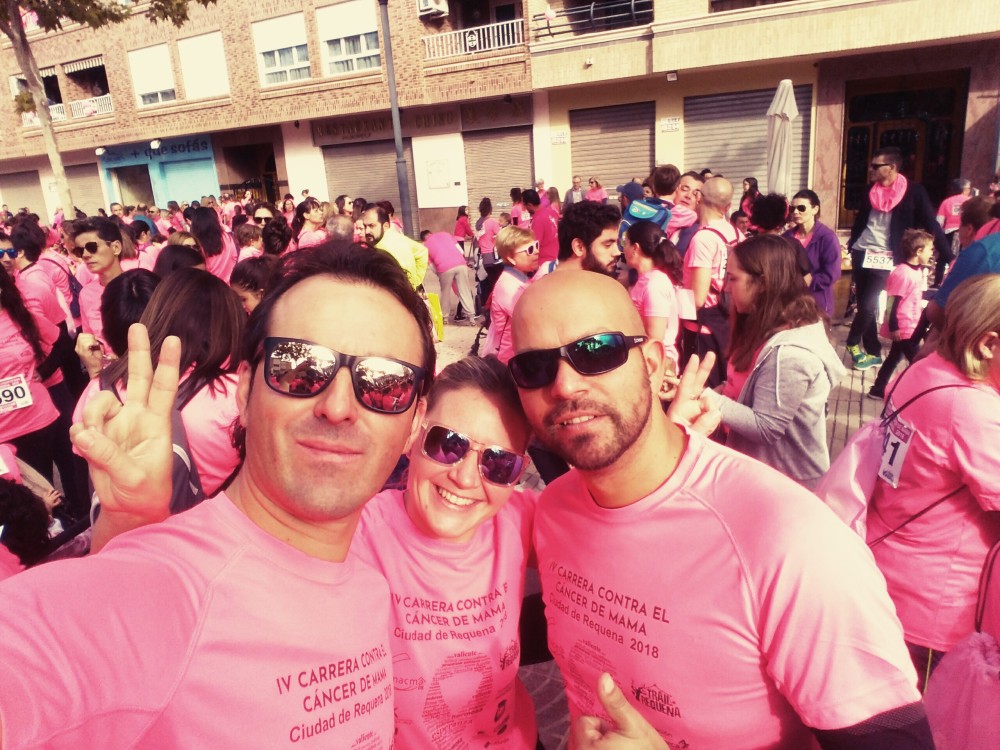 We were surrounded by people of all ages and all kinds in a completely festive atmosphere as all the people wanted to support these brave women. There were people with roller skates and some with scooters. There were dogs with the official t-shirt for the event, and even a band livening things up with some music.

Maybe “race” or “run” is not the proper term for this event. On one hand it’s correct, but on the other hand, the majority of participants walk the whole route. We decided to do a combination. We ran the better part of the tour, but sometimes we walked for a few minutes especially any time we had to go uphill.

The race was a nice circular route taking us by some of the well known parts of Requena, starting and finishing in Monumento a la Vendimia and passing by the whole Avenida de Arrabal, going up La Villa by La Cuesta del Cristo and leaving it by La cuesta de las Carnicerías.

I think it’s nice to participate in this kind of activity, since everyone feels satisfied by the effort of providing a little help for something so (unfortunately) common as breast cancer. Mothers, grandmas, sisters, partners, friends, nieces, etc… and after all, ourselves, are the main recipients of this help.

Thanks to Isabel Escudero Alarcón and Juan García Escribá for their photos, and Mercedes Zahonero for her help.