We think conversation is one of the most fun parts of language learning. On Thursdays, we switch languages and ask each other questions to learn more about Tuesday’s topic. Today, Rober interviews Jessica about seasonal harvests in the Unites States. You can read Jessica’s original post about the grape harvest at Ten Spoon Winery here.

Rober: Have you ever worked on a seasonal harvest? If not, would you like to do it?
Jessica: I haven’t worked on one, at least not for money. I used to do a lot of fruit picking when I lived in Oregon, but that was just for myself to freeze and keep for the winter.  When I was a kid, some of my earliest memories are “helping” with the apple harvest at my family’s orchard in Indiana. My great grandparents bought the farm in the thirties and planted the apple orchard. We used to spend a lot of time there in the fall picking apples and then standing around the cider press, cleaning the apples, and then sending them up the conveyor belt to be made into cider. 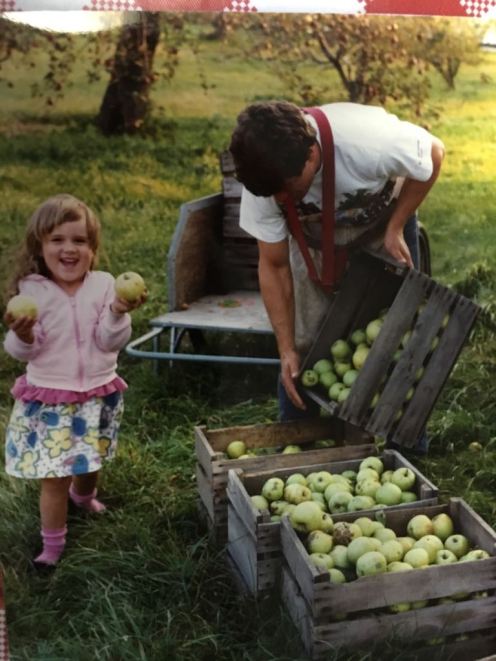 Picking apples at my family’s orchard

Rober: What grape varieties, apart from St. Pepín, are grown in Montana? What’s your favorite?
J: Ten Spoon grows Maréchal Foch, Frontenac, Leon Millot, Swenson Red and St. Croix red grapes and St. Pepin and LaCrosse whites. I don’t know any of those varieties very well, the Ten Spoon website says that their grapes are French-American Hybrids that grow well in cold climates. The varieties were developed by Minnesotan farmer Elmer Swenson. I will need to do some more taste testing before I pick a favorite, because I actually haven’t tried several of these. Ten Spoon also makes a Flathead cherry wine which is drier than I expected and very good. As far as I know, this is the only vineyard in Montana that grows its own grapes. There are some other wineries that bottle wines made from out-of-state grapes.

R: As you know, Requena is well-known for wine, what produce is Missoula known for?
J: Huckleberries. They are like tiny, tart blueberries that grow wild in the mountains. It takes a long time to harvest a large amount, so a gallon bag at the farmers market costs over $40. We went to a lake this summer with some friends and the area was covered in huckleberries, so we picked for a couple of hours and came up with a pretty good haul. I still have a little bag in the freezer from that day. My favorite way to eat them is fresh or in pancakes, but people make all sorts of things out of them: syrups, candy, ice cream, soaps, etc.

R: What areas or states are most famous for wine in the United States?
J: Napa and Sonoma Valleys north of the bay area in California produce the majority of the wine in the U.S. and are well-known for both their wine and tourism. While the North Bay is the most well-known, the entire California Coast is good for wine growing. The characteristic California style is ripe and fruity. Other states that produce a lot of wine are Washington, Oregon, and New York.